“Started sailing with Dad when I was about 8 in a Herron, graduated (got to big) to a Holdfast Trainer (SA based training boat) with my sister. Then moved into International Cadets, 420s, Sharpies and then international 14 when I moved to Melbourne in 1998 and have been sailing them ever since.  I have competed in every National Championship (except Sydney 2001) and every World Championship (except Japan 2003) since starting to sail 14s in 1998. First National heat win was Sydney 2008, First National Titles win Sydney 2016, First World Heat win San Fran 2018, 4th Australian Title win in 2020 and 5th in the Worlds. Currently sailing 18 foot skiffs in Brisbane and Sydney to help develop skiff sailing in Brisbane.”

“I started sailing in a holdfast trainer on Kangaroo Island when I was 7 years old. Since then I’ve sailed in several different classes, including getting my first taste in skiff sailing in a skate when I was 14 years old. I’ve competed in 420 nationals, pacer nationals, multiple laser nationals, and the Youth Olympic Festival (team sailing, 2007). I was also in the State Youth Squad for several years. In 14s I have competed in world regattas with Dave from 2010 to 2020 (Sydney, Weymouth, Toronto, Geelong, Carnac, San Francisco, and Perth), finishing 5th in Perth this year. Dave and I have also won the Pacific Rim Championship in Hawaii (2012), West Coast USA Championship in San Diego (2013), and four Australian national titles.”

Hollom hull built by China New Yachts. it is one of the first batch of five boats that came out if China. The hull is prepeg carbon with a foam core. Various fitting suppliers used.

It has a Selden mast, CST boom, c-tech pole (it originally had a Selden Pole which broke in Perth).

I use Hollom rudder and dagger board made by composite craft in the UK.

The sails are made by Alegayter Sails with input from myself and Trent. 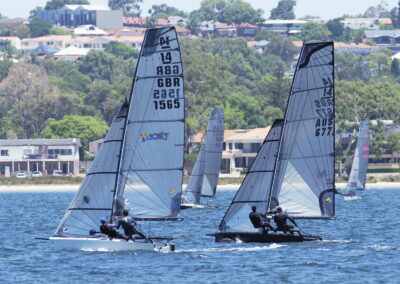 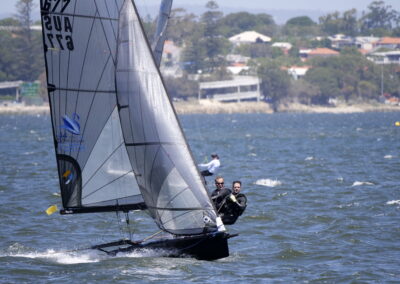 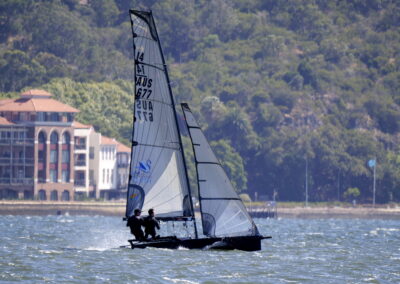 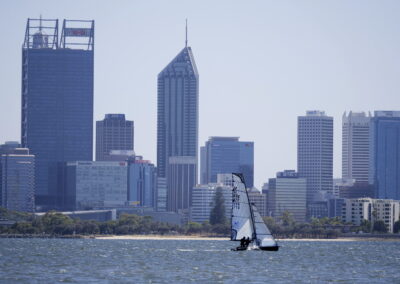 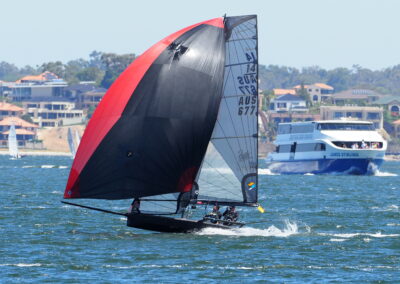 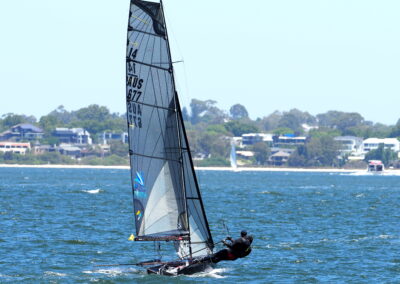 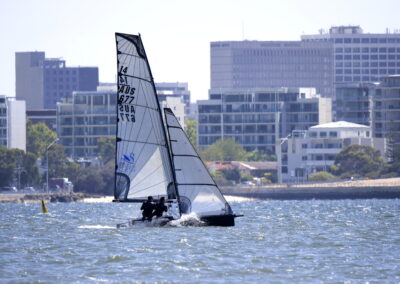